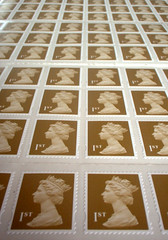 The Con-Dem government has been urged not to pass a death sentence on the Royal Mail by flogging it off to the highest bidder.

Postal union CWU accused Liberal Democrat Postal Affairs Minister Ed Davey of going against his own party's policy by suggesting that an option for the Royal Mail would be to float it on the London Stock Exchange to raise £9 billion for the company.

In his first interview since taking office Mr Davey also called for an end to big payouts to Royal Mail executives and warned that "the pensions of past employees, current employees and their families would be at risk" if action was not taken.

Mr Davey said: "The truth is that Royal Mail's situation, if nothing is done, will become increasingly dire.

"If we don't transform Royal Mail it will be dragged down by a lethal combination of falling mail volumes, low investment and potentially one of the worst pension crises for employees in British history."

However the Post Office, which runs Britain's 12,000 branches, would remain in public hands under his plans.

But the union has argued that privatising a national treasure like the Royal Mail is more Thatcherite than Lib Dem and would be against the interests of customers and deeply unpopular with the public.

"The proposals to split the post office network from the Royal Mail as outlined by Mr Davey will threaten the viability of the network, will wreck the service and will wreck rural and deprived communities which rely on the Post Office.

"We all know that privatisation leads to higher prices as private companies maximise their own profit ahead of any sense of public service. We're saying to the government: 'Don't privatise this successful public company'."

The union will also be seeking assurances from both Royal Mail and the government on a resolution to pension issues.

"Royal Mail is being successfully transformed in the public sector and this will continue to gather pace as new machinery and the business transformation plan is fully rolled out.

"In addition, industrial relations are transforming from confrontation to co-operation and we are looking forward to working with the newly appointed chief executive Moya Greene - someone with significant experience in the industry."

He said that, far from being a drain on the public purse, the Royal Mail is a profitable asset making over £400 million last year - a jump of 26 per cent.

A spokeswoman for the Royal Mail declined to comment.