FLORHAM PARK, N.J. -- Mark Sanchez went to work Tuesday, preparing for a big football game. Some 40 miles away, a little boy from Queens, N.Y., was buried -- a friend of the New York Jets quarterback.

Sanchez and Aiden Binkley, 11, met each other only a few weeks ago, but they became fast friends. Binkley was suffering from a rare form of cancer, and he had only two wishes -- he wanted his two brothers to stay healthy and he wanted to meet Sanchez.

And so he did.

Aiden visited the Jets' training facility Dec. 15, and he received the VIP treatment, as if he were a big-name player making a free-agent visit. He watched practice and was escorted to owner Woody Johnson's second-floor office, where he met Antonio Cromartie, Dustin Keller, Mike Devito and others.

And, finally, Sanchez. The people who were there say Aiden's face lit up like Broadway at night.

"He sat there, beaming and smiling," said Aiden's mother, Lisa Binkley, who initially wasn't sure if it was a good idea to make the trip because Aiden was in such pain.

"Nothing meant more to him than coming here and meeting Mark and meeting the Jets," Keller said quietly Wednesday in the Jets' locker room. "Great kid ... a tough situation."

The 24-year-old quarterback was immediately taken by Aiden and his upbeat personality and his love of the Jets. A few days later, Sanchez & Co. beat the Steelers in Pittsburgh -- the biggest win of the season -- and Sanchez sent his new friend a game ball.

Sanchez was deeply touched by Aiden, who battled rhabdomyosarcoma, according to a 2008 New York Daily News article. There was a lemon-sized tumor that spread from his pelvis to his lungs, and he required 60 weeks of chemotherapy.

They became texting buddies and, one day, Sanchez surprised Aiden's parents by asking, "Can I come over?" When Sanchez arrived, the boy was sleeping. Sanchez sat at Aiden's feet, waiting until he woke up.

"He opened his eyes and there was Mark, sitting on the couch," Lisa said. "He was so sweet."

They ended up having a long conversation, like a couple of old friends. Aiden took Sanchez to his bedroom and showed him his sports stuff, including his hockey stick. He gave Sanchez a camouflage bracelet with the inscription "Binkley's Battle." Sanchez and Keller were wearing the bracelets Wednesday in the Jets' locker room.

Sanchez, choked with emotion, paused several times as he talked about Aiden, whom he met through the Teddy Atlas Foundation. Atlas, the boxing trainer and ESPN analyst, was a Jets special assistant under former coach Eric Mangini.

"He brought me so much inspiration. ... It's hard to talk about him," Sanchez said. "He meant the world to me. I felt like I've known him forever. ... I saw his personality. I saw his competitive spirit. I saw him fighting every day.

"I'm complaining about a shoulder. Are you kidding me? ... I think 'he was 11 years old, and he has cancer eating away at his body'," Sanchez continued. "This kid is fighting every day. He's smiling every time I talk to him. I visited him at his home. I mean, he has to get carried up the stairs because he's so weak and all he wants to talk about is LT [LaDainian Tomlinson] and Darrelle Revis and Rex Ryan and me.

"Oh, man, it kills you, just thinking about it. I love him to death."

Sanchez was sitting at his locker before facing the Steelers, going over the game plan one last time, when he received a text from Aiden. His friend was concerned about the chilly weather.

"He's saying, 'It looks cold out there in Pittsburgh. I'm glad I'm watching from home. Good luck,'" Sanchez said with a chuckle. "Little stuff like that really fires you up."

After the game, Aiden fired off a congratulatory text to Sanchez. Don't expect a return text, his mother warned, explaining that Sanchez would be too busy to answer an 11-year-old boy. So they watched his postgame news conference on TV, never imagining they'd hear from him.

About 20 minutes later, the phone rang. It was Sanchez.

"We were blown away," Lisa said.

In his final days, Aiden's cancer was so unbearable that he couldn't get out of bed. But he kept his phone close by, just in case his friend Mark decided to call or text.

Funny thing about Sanchez's texts: Instead of a simple, inspirational message, he always posed a question, trying to initiate a conversation.

Their friendship was born at a difficult time for Sanchez. The Jets were on a two-game losing streak after being embarrassed by the New England Patriots 45-3 and showing no energy in a 10-6 loss to the Miami Dolphins. Even Ryan admitted he thought about pulling his franchise quarterback from the Miami game.

"I'm not a happy camper, I'm upset, I'm frustrated," Sanchez said. "I want to make it right. I want to hurry up and play another game."

"All I hear from someone is, 'There's a youngster who's terminally ill with cancer and all he wants to do is meet you,'" Sanchez said. "It changes your whole world. It stops everything. You get a chance to step back. It's really close to my heart. ... He's the best. I love him."

Keith Sullivan, an Atlas Foundation board member, was struck by Sanchez's sincerity. In that initial meeting, Sanchez and Aiden exchanged cell phone numbers, with Sanchez telling the boy, "I'll shoot you a text later. We'll talk." And Sullivan hoped it wasn't just lip service, a millionaire athlete trying to appease a starstruck kid.

"Aiden had a smile on his face for the last three weeks of his life," Sullivan said.

Aiden lost his courageous battle last Thursday. Before the Jets' game last Sunday against the Buffalo Bills, the Jets honored him with a moment of silence.

There's a short podcast toward the middle of the article with Sanchez's thoughts on Aiden, he gets real choked up thinking about him.

There aren't many positive sports stories these days. This one was made special by Sanchez going way beyond the kid's visit to the practice facility and making a personal connection with him. 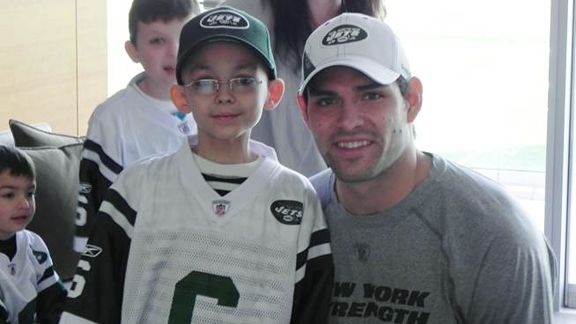