The Koch-funded Americans for Prosperity astroturf website is now down.  Try and visit and you see:

Now the story from Politicus USA:

Anonymous Joins The Wisconsin Protests By Taking Out Americans For Prosperity
Posted on February 27, 2011 by Jason Easley

The cyber protest group Anonymous has joined the protesters of Wisconsin and Americans all across this country in the battle against what they described as the “Koch brothers attempt usurp democracy.” The opening salvo in Anon’s OpWisconsin occurred today when the Koch brothers funded Americans for Prosperity was knocked offline in an attempt to take a small slice of the Internet back from the liberty stealing propagandists.

In a press release Anonymous put the Koch brothers on notice, “It has come to our attention that the brothers, David and Charles Koch–the billionaire owners of Koch Industries–have long attempted to usurp American Democracy. Their actions to undermine the legitimate political process in Wisconsin are the final straw. Starting today we fight back.”

They continued, “Koch Industries, and oligarchs like them, have most recently started to manipulate the political agenda in Wisconsin. Governor Walker’s union-busting budget plan contains a clause that went nearly un-noticed. This clause would allow the sale of publicly owned utility plants in Wisconsin to private parties (specifically, Koch Industries) at any price, no matter how low, without a public bidding process. The Koch’s have helped to fuel the unrest in Wisconsin and the drive behind the bill to eliminate the collective bargaining power of unions in a bid to gain a monopoly over the state’s power supplies.”

Anonymous made their support for the Wisconsin patriots clear, and called for a boycott of Koch Industries products, “Anonymous hears the voice of the downtrodden American people, whose rights and liberties are being systematically removed one by one, even when their own government refuses to listen or worse – is complicit in these attacks. We are actively seeking vulnerabilities, but in the mean time we are calling for all supporters of true Democracy, and Freedom of The People, to boycott all Koch Industries’ paper products. We welcome unions across the globe to join us in this boycott to show that you will not allow big business to dictate your freedom.”

The members of Anonymous are highly intelligent and some of the most technically sophisticated people on the planet, so when they put out a press release telling anyone that they are coming after them, you’d best batten down the hatches and get your house in order, because a whole lot of cyber pain is heading in your direction.

It appears to have taken Anonymous a matter of minutes to find the vulnerability in the website for the Koch brothers’ AstroTurf front group Americans For Prosperity, because the site was knocked down with a DDOS attack. I would think that whoever the webmaster is for Americans For Prosperity would have at least tried to make it a challenge for Anonymous to knock them down, but the power of the grassroots and the individual yearning for freedom was too strong for even the money of the Koch brothers to be able to stop.

Anonymous is helping to lend voice and cyber muscle to those who have been silenced by our democracy for sale to the highest bidder political system. What started in Madison, Wisconsin as a protest among public sector employees has spread to protests across the country. Now the battle has moved to the Internet. The Koch brothers and Gov. Scott Walker have unleashed a powerful force that won’t be denied.

Anonymous has fired their opening shot and just like the Wisconsin protesters their cries in the name of freedom will be heard. They can’t be silenced. They won’t be denied.

When Anonymous says, "expect us," they aren't kidding. 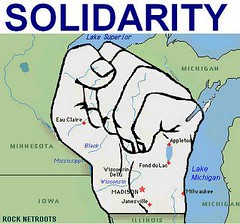 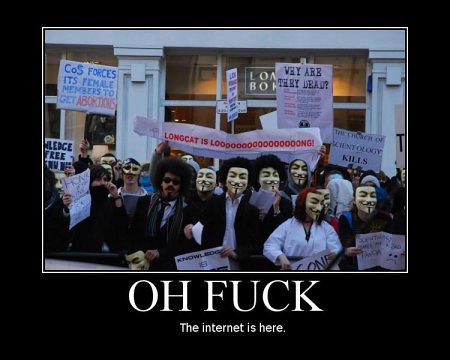