#hackgate: Continuation of the fustercluck 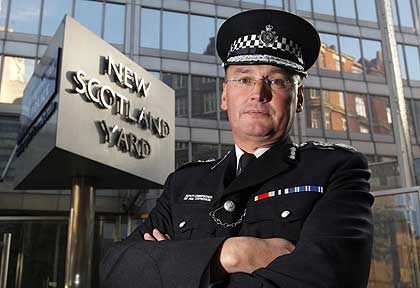 The resignation of Sir Paul Stephenson, Commissioner of the Metropolitan Police, is a shocking blow to David Cameron’s credibility as Prime Minister. There’s a sense now of a tidal wave of scandal surrounding the entire British establishment. The flood waters are slowly rising and it doesn’t seem there’s a damn thing anyone can do about it. Here’s blogger Ian Dale putting into words what many people are thinking:

I can’t believe I am even writing this, but it is no longer an impossibility to imagine this scandal bringing down the Prime Minister or even the government. OK, some of you reading this may think that last sentence is a deranged ranting, and you may be right. Indeed, I hope you are. But Sir Paul Stephenson launched a thinly veiled attack on David Cameron in his resignation statement and the Prime Minister is already on the ropes about the propriety of his relationship with Andy Coulson.
James Forsyth of the Spectator, meanwhile, notes that Stephenson has “kicked Cameron on the way out”, and that Yvette Cooper is already doing the rounds of television studios making effective use of this detail.

One of Dave’s perceived strengths as a politician – his calmness in a crisis, his refusal to be put off his stride by the sniping of malevolent critics (as he sees them) – now doesn’t look quite so useful. It looks instead like the arrogance of a man who will spend Christmas with whomever he bloody well likes, thanks.

Toby Young is right to point out that Gordon Brown sucked as vigorously as anyone else at Murdoch’s teat, but he’s not Prime Minister. And there’s a chance, albeit a slim one, that this time next week Cameron won’t be either.