Senate Republicans' Plan B to gut Obamacare is poised for failure, as three GOP senators said Tuesday they will vote against a procedural motion to advance repeal of the health law without a replacement — effectively dooming Senate Majority Leader Mitch McConnell’s latest effort.

McConnell said Tuesday that he would still move to hold a vote soon, which would put senators on the record even if the vote's outcome was preordained.

Conspiracy theorist Alex Jones has apologized for his website’s role in spreading a fake news story that inspired an armed man to storm a pizzeria in search of abused children in December.

Jones, who operates the website Infowars, had suggested that Comet Ping Pong in Washington, D.C., was hiding child sex slaves in its basement as part of a pedophilia ring supported by top Democratic politicians.

No evidence ever emerged that such activities took place — the restaurant doesn’t even have a basement, as gunman Edgar Welch found out when he searched the premises. Jones cited government emails released by WikiLeaks that some people suggested contained “code words for human trafficking and/or pedophilia.”( Collapse )

I hope there is some legal recourse for this restaurant owner. Posting that lame ass apology doesn't begin to make up for the behavior of that disgusting pos (Jones), and he shouldn't be able to just walk away from the whole thing scot free.

ETA: Just to add an extra twist to this, I found out that a close relative of mine is one of the people who has been instrumental in spreading this crap (along with other fake news, like Hillary Clinton having Parkinson's). He was on 60 Minutes last night talking about/defending his actions. I am so ashamed! I wish there was a way to have all the DNA extracted from my chromosomes that matches his, because I do NOT want to be related to this person. UGH.

President Trump’s national security adviser, Gen. Michael Flynn, was forced to resign on Monday night as a result of getting caught lying about whether he discussed sanctions in a December telephone call with a Russian diplomat. The only reason the public learned about Flynn’s lie is because someone inside the U.S. government violated the criminal law by leaking the contents of Flynn’s intercepted communications.
( Collapse )


The Left Needs to Assess the Implications of the Flynn Scandal

Many so-called progressives are stoked that Trump’s National Security Advisor, Michael Flynn, resigned charges surrounding his discussions with a Russian ambassador while Trump was president-elect.
( Collapse )


A Dangerous Hysteria on Russia

A grave danger from the U.S.-Russian hostilities bubbling in Official Washington is that both sides have narratives asserting their complete innocence rather than seeing the two sides of the story, observes James W Carden.
( Collapse )


We Must Know the Truth

We’ve said it before and we’ll say it again: there MUST be an investigation by an independent, bipartisan commission of Russia’s ties to Donald Trump and his associates and that nation’s interference in our elections. Emphasize independent and bipartisan. That commission must have full subpoena power to call witnesses and make them testify under oath or risk prosecution. Hearings must be held out in the open, and televised live for the nation and the world to see. That’s what a democracy is all about.
( Collapse )

President Donald Trump's administration is plowing over the government's system of checks and balances, pushing through a blitzkrieg of executive orders in order to implement its extreme agenda. At the top of the to-do list for the hawkish members of Trump's cabinet is a decades-old warmongers' dream: war with Iran. The U.S. is once again ramping up tension with the major Middle Eastern country, hurtling toward military conflict — with staunch bipartisan support.
( Collapse )

It Took Donald Trump 8 Days To Bring The U.S. To The Brink Of A Constitutional Crisis

It took little more than a week in office for President Donald Trump to thrust the nation to the brink of a constitutional crisis.( Collapse )

Source (HuffPost) has video with embed code that doesn't work at LJ (evidently).

Wow, a constitutional crisis less than two weeks into his term? This thing is getting more surreal by the minute. Drumpf's complete and total lack of understanding of the Constitution and the way the US government works is pathetic. (No, Donnie, you are NOT above the law. The potus does not have the autonomy of a CEO or the autocratic powers of a fascist dictator!)

AND, in addition to being just plain wrong, this executive order banning Muslims was handled in such a half-assed way that even before the legal shit hit the fan, there was massive confusion among the people responsible for enforcing it as to exactly who it applied to, etc., leading to massive inconsistencies in how it was being applied at different airports across the country. AND we have the Dept of Homeland Security saying it will obey the court order (“We are and will remain in compliance with judicial orders.”), while Customs and Border Patrol (which is actually part of the Dept. of Homeland Security!) not only refuses to do so but also violates the principle of due process by refusing to let affected people talk to lawyers. AND members of the legislative branch of the government showing up at airports trying to get the executive branch to obey a court order issued by the judicial branch--weird! This situation is fucked up on so many levels that it boggles the mind. I can't even imagine wtf is going to happen next. I just hope Corey Booker, Elizabeth Warren, Dick Durbin, Tammy Duckworth, et al. really mean it about pressing for an investigation and they're not just making a bunch of noise in order to look like they're doing something.

Future Aliens to Study the Cause of The Collapse of Human Civilization. The Cause: Humans.

In 2011, unemployment was at a near crisis level. The jobless rate was stuck around 9 percent nationally, an unusually high number due to the continuing effects of the financial crash.
( Collapse )


Mikhail Gorbachev: It Appears ‘the World Is Preparing for War’

Former Soviet leader Mikhail Gorbachev has warned that it appears “as if the world is preparing for war.”
( Collapse )

What price do we pay for civilization? For Walter Scheidel, a professor of history and classics at Stanford, civilization has come at the cost of glaring economic inequality since the Stone Age. The sole exception, in his account, is widespread violence – wars, pandemics, civil unrest; only violent shocks like these have substantially reduced inequality over the millennia.( Collapse )

GOP Wants To Punish Filming, Photography On The House Floor 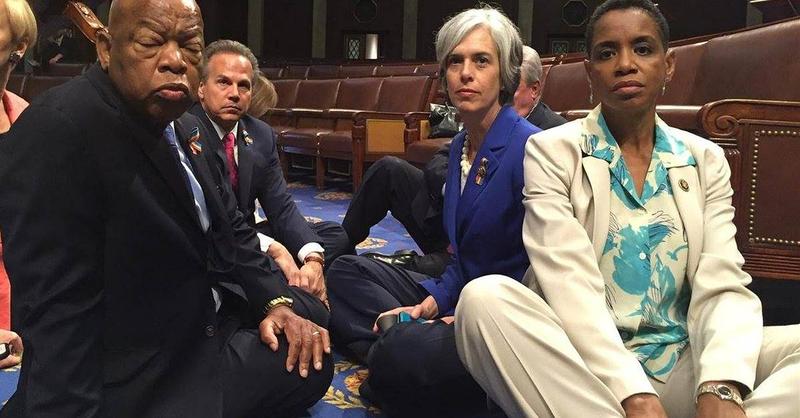 When caught on camera doing something bad, most people stop doing the bad thing.

House Republicans try to get rid of the cameras.

On Monday, leadership in the GOP-controlled House proposed a rule that would punish representatives who film, take photos, record or broadcast anything from the House floor. Bloomberg, which first reported the rule change, says first-time offenders would face a $500 fine; repeat offenders would see $2,500 docked from their paychecks.

The rule is a clear response to Democratic lawmakers who, in a protest this June after the deadliest shooting in U.S. history, staged a sit-in on the House floor in an attempt to compel Republican leadership to vote on gun control legislation.

Republicans responded instead by gaveling the House into recess, thereby cutting off C-SPAN cameras that broadcast the protest. In the absence of cameras, Democrats began tweeting photos and live-streaming the event on their phones, which C-SPAN broadcast instead.

Republicans defended the proposal as a means to maintain order in the chamber and prevent disruption.

“These changes will help ensure that order and decorum are preserved in the House of Representatives so lawmakers can do the people’s work,” said AshLee Strong, a spokeswoman for House Speaker Paul Ryan (R-Wis.), in a statement Monday.

U.S. News & World Reports notes current rules already prohibit taking photos or video on the floor. This proposal would punish those who break the rule ― all the way up to potential sanctions.

“House Republicans continue to act as the handmaidens of the gun lobby refusing to pass sensible, bipartisan legislation to expand background checks and keep guns out of the hands of terrorists,” a spokesman for House Minority Leader Nancy Pelosi of California said in a statement to U.S. News on Tuesday. “Speaker Ryan can continue to shamefully ignore the calls for action from the American people, but House Democrats will never stop speaking out against the daily tragedy of gun violence in this country.”

The new rules will be considered when the House reconvenes Jan. 3.

Duopoly Democracy is a Choice Between The (Welcoming Gay, Women, Minorities, Muslims, Etc.) Republican Lite Neoliberal Party and The God-fearing Tin-foil Hat Confederate Neoliberal Party. No, You Can't Have a Third Pary.

Is There a Historic Economic Shift Underway?
Global elites can't count on business as usual.

This interview was originally published on the Institute for New Economic Thinking blog.

Milwaukee-born Jim Chanos, founder and managing partner of New York-based Kynikos Associates, teaches University of Wisconsin and Yale business students about corporate fraud. During his life and career, he has witnessed seismic shifts in economic thinking and the relationship between labor and capital. Chanos shares his thoughts on the world emerging from the election of Donald Trump and the tumultuous political events of 2016.
( Collapse )

Mike Pence’s Neighbors Are Trolling Him With Rainbow Flags

Two weeks after Mike Pence was schooled on racial and ethnic diversity by the cast of Broadway’s “Hamilton,” others who disagree with the vice president-elect’s views are expressing themselves in profound ways.( Collapse )

Tbqh, I don't expect this "colorful gesture" to have any real impact on Pence (other than possibly making him go, "Ewww, ewww, ewww, nasty gay stuff" lol). But I still think it's worthwhile, as a subtle yet in-your-face reminder to Pence and his Orange Overlord that most Americans are not behind their twisted agenda, and as a morale booster for the people doing it (as well as those of us observing from afar).

Also, sometimes a thing is worth doing, simply because it is a good and right thing to do. I hope we see lots and lots of this sort of thing in the weeks and months to come.

The day after President-elect Donald Trump's inauguration, Jan. 20, 2017, a march is slated to take place on the National Mall.

It's being called the Women's March on Washington. (It was being referred to, somewhat controversially, as the "Million Women March" before it was re-branded.) At this point, thousands of women and allies plan to rally here for the Women's March on Washington. The march aims to "send a bold message to our new administration on their first day in office, and to the world that women's rights are human rights," according to the event's official website.( Collapse )

Women’s March on Washington: Everything You Need to Know

After receiving a denial for the initial bid for a permit, the Women’s March on Washington was approved in its bid for its projected 200,000 participants to meet in downtown Washington the day after President-elect Donald Trump’s projected inauguration. Listed below are all of the details surrounding the event.( Collapse )

Anyone here planning to attend? The Democrats in my area have chartered a bus, and I'm hoping to go if I can figure out how to fit it into my budget going! The bus leaves Friday, 1/20 at 6 pm, and will arrive in Washington on Saturday morning. After the day's activities, the bus will head back Saturday evening, arriving back here on Sunday morning. It'll be a bit of a marathon, but I think it'll be worth it. I've always dreamed of being part of something like this.

[Updated to reflect that I really am going]
Collapse